The passing of Karl Koenig this January left a huge gap in the world of photography. He wrote the definite book on gumoil photography and was primarily known for his work in this medium although he practiced a variety of photographic and printmaking techniques. However, it was his imagery that he was most well known for: Striking shots of concentration camps, majestic trees, lonely grain elevators, remote places in New Mexico, and haunting French cemeteries.

Karl's wife, Frances Koenig chose the images for this show that gave an overview of the gumoil process and a variety of images. 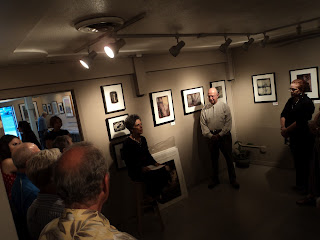 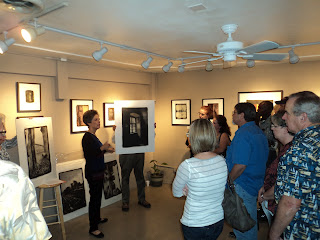 Each gumoil image is hand-crafted after coating a sheet of 100% rag paper with sensitized liquid gum arabic and contact-exposing it to a transparent or translucent positive under intense ultraviolet radiation. The coated sheet is then developed in water, thoroughly dried, and later rubbed with a dark pigment such as lamp black oil paint.
Excess pigment is wiped off and the paper is briefly dipped in a bleach bath to oxidize away (etch) some of the light-hardened residual gum arabic. This leaves the next tonal region of the picture open to a second pigment application.
The sequence is repeated until the print is finished over the course of several days or weeks. It is the successive etchings and applications of oil colors which lead to the richness and dimensionality of the finished print.   (From Karl Koenig's website www.http://www.gumoil.com/gumoil-process/) 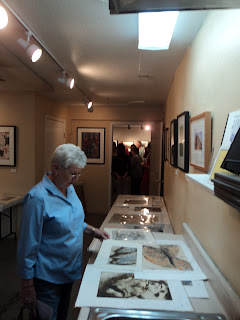 Posted by New Grounds Print Workshop at 1:49 PM No comments: