Albuquerque art thiefs on the loose!

Albuquerque art thiefs on the loose! Two people one black man, one black woman in a white jeep have stole art from 3 galleries on Montgomery. Please if you see them call the police, report #111730489.
Posted by New Grounds Print Workshop at 3:21 PM No comments:

Check out our website at www.newgroundsgallery.com to see the newest inventory of Leonid Sroganov's etchings! Newly updated! 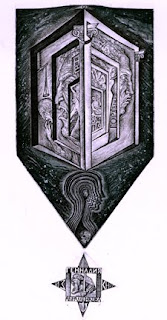 This year's Rachel Allen Memorial Fellowship recipient is TK Ryn from Madrid, New Mexico. The runner-up is Ileen Weiss. Congratulations to the both of you! This annual fellowship, awarded by New Grounds, consists of a free class and a three month membership.

For more information please visit our website about next year's fellowship.
Posted by New Grounds Print Workshop at 1:33 PM No comments:

This is a first time exhibition of five different artists from India who have perfected the art of serigraphy, or screen printing. From softly hued abstract scenes to contemporary images of trains and traditional imagery, this show is full of surprises. Screen printing, made popular by Andy Warhol in the 1960s, is a printing technique that uses a woven mesh to support an ink-blocking stencil. The attached stencil forms open areas of mesh that transfer ink or other printable materials which can be pressed through the mesh as a sharp-edged image onto a substrate. A squeege is moved across the screen stencil, forcing or pumping ink past the threads of the woven mesh in the open areas. 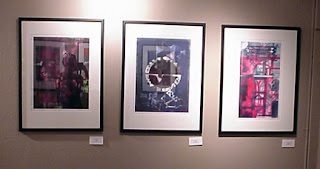 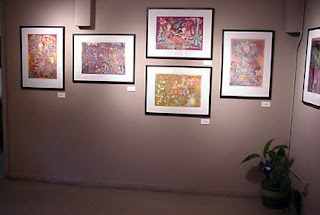 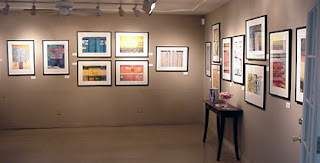 The artists were not able to make it to the opening. Hariraam will be in Albuquerque to print at the studio sometime in the summer. We are looking forward to his arrival!

Bhagwan Shankar Chavan, b. 1958, Chinkhill, India
Chavan creates his images from multiple screens to which he exposes mylar with watercolour washes. One can see in his work a gradual building up of tones from broad and flat brush strokes of pale water washes to more intense and almost calligraphic lines. The result abstract images have an almost poetic or lyrical feel to them.


S.Bhavani Shankar, b.1956, Chennai, India. He passed away May 9, 2011
Shankar uses computer graphics to generate his very painterly images. He pays special attention to textures, and often combines scans of partly torn or crumpled paper with images of fungi and moss, or dilapidated surfaces such as faded paint on walls and wood, floors, roofs, or anything that helps him achieve the pulsating energy that charges his work.


Ravi Dhanapal, b. 1956 Chennai, India
Dhanapal’s work can best be described as landscapes of the mind. Infused with an ethereal light, his images seem to represent worlds of unknown origin. Some of his collage-like compositions are almost topographical in nature while others look more like surreal cities.


V.Hariraam, b.1948, Bangalore, India
Hariraam’s work has slowly changed from figurative to abstract and now back to more realistic, yet abstracted rendering of Indian railroad cars.
Posted by New Grounds Print Workshop at 10:42 AM No comments: