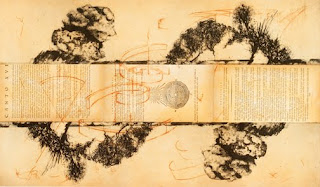 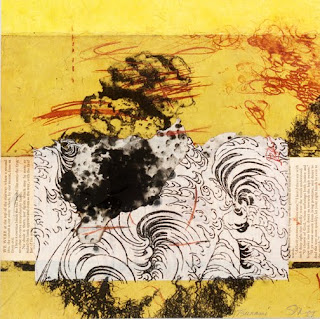 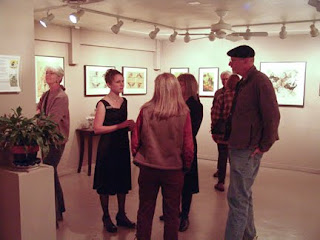 Suzanne Marshall has been with New Grounds since it opened in 1996 – she has had so many solo shows we lost track. And yet, show after show her works gets more exciting and more sophisticated. Her new body of work features etchings and gravures that are torn, collaged, scorched and waxed to create visually seductive surfaces. Several images are presented in hand made steel frames by the late Barbara Pfaff which makes the work even more exciting.

Her images deal with volcanoes, tsunamis, and the Yangtze River Dam project and the general human proclivity to exploit the natural world with potential consequence of a ravaged environment. However, her point of view is that of an observer rather than of someone who points her finger at others. While Marshall’s work is thoughtful and slightly cynical it also infused with quirky elegance and uncommon beauty. 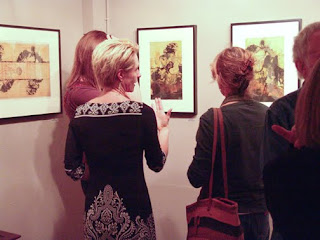 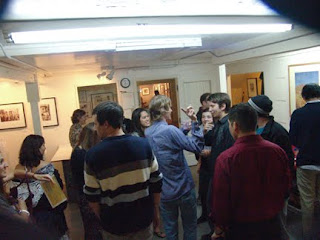 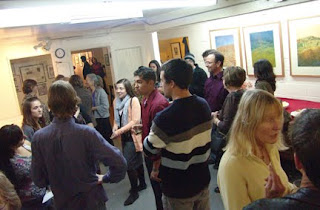 As always, we had a great attendance for the reception, and a full house for the demonstration. Suzanne, like most artists, does not like this part of the evening and we appreciate that she did such a great job showing us how she combines gravure and chine collé. 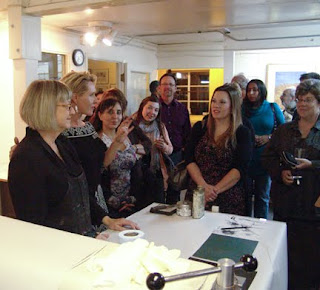 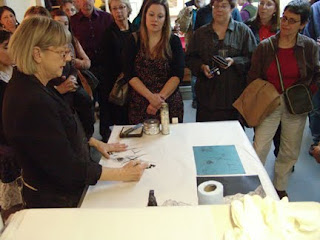 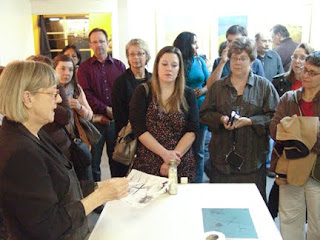 Suzanne used the gravure medium mainly as a substitute for lithography since she can draw with a pencil to create rich tonal drawings. Here she shows how she creates her images: She uses a Stabillo pencil to draw on prepared mylar. Not shown in this demo is the actual plate making: The drawing on mylar is transferred to a light sensitive polymer plate with the help of an exposing unit – basically a powerful vacuum combined with a bright UV light. The plates, once exposed and developed are then printed like etchings. 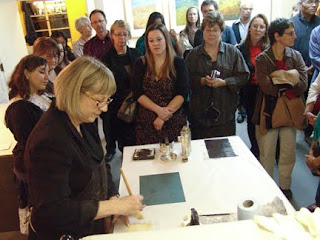 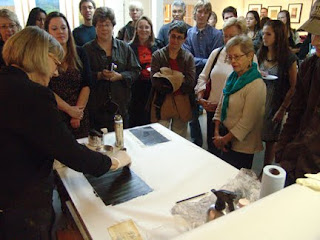 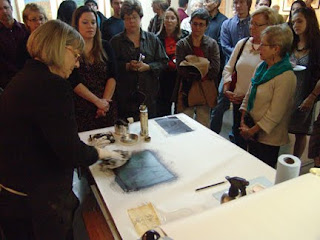 Suzanne now cards ink on the polymer plates and removes the excess with a tarlatan. The objective is to leave ink in just the recessed areas of the plate which are the image areas. 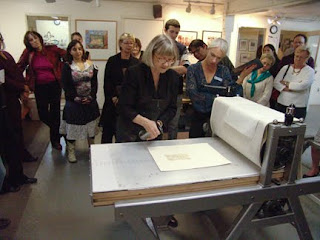 The press blankets are placed over the plate/paper package and Suzanne rolls everything trough the press; the pressure of the rollers will force the ink in the recessed areas to be transferred to the damp paper. 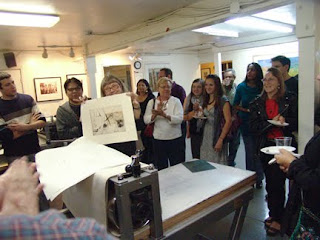 The finished print! As always, our featured artist makes this look so easy. If you wish to learn more about this process, our next gravure class is scheduled for February of next year. In the meanwhile, check out Suzanne Marshall’s show – it makes such good use of the gravure medium. The show runs until November 28.

Thank all of you who made it to the reception, and for all the New Grounds and Matrix artists who volunteered their time to make this event even better. A special thanks to Mike Ruhdal who took the photographs. See you again December 11 for our Holiday Sale!

Posted by New Grounds Print Workshop at 10:58 AM No comments: 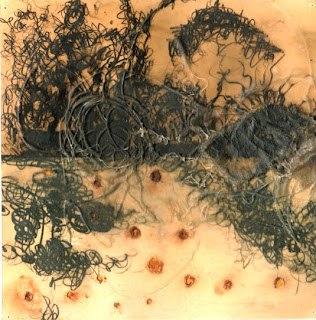 
Marshall’s bold, semi-abstract etchings and gravures are torn, collaged, scorched and waxed to create visually seductive surfaces. Her images deal with the human proclivity to exploit the natural world with potential consequence of a ravaged environment. However, her point of view is that of an observer rather than of someone who points her finger at others. While Marshall’s work is thoughtful and slightly cynical it also infused with quirky elegance and uncommon beauty.

Demonstration during the reception: How to create a gravure from a drawing, by Suzanne Marshall from 6:30- 7:00 PM.