“Emergence” by Adabel Allen was a hit!

Adabel Allen is a well-known artist in Albuquerque and has many family and friends who come to support her as an artist. It was pouring rain out the night of her opening and people came anyway! It was lovely; all the smiles, hugs and good energy that everyone brought with them. Adabel was delighted to have her work hanging at New Grounds and we are proud to represent her. At each opening we have a featured artist give a demonstration of a printmaking process. For this opening she demoed a two plate gravure printmaking process. 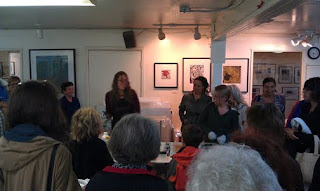 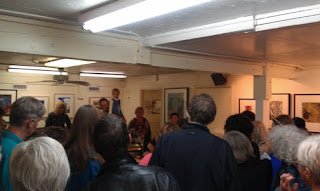 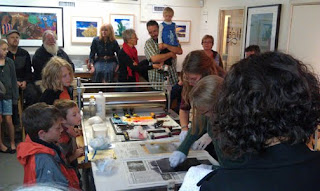 She has many techniques up her sleeve that she uses in her work. Even experienced printmakers had a difficult time figuring out how she did it. As seen in the piece, “Nesting-Safety”, there are many colors and layers that have been applied using stencils and selective wiping. 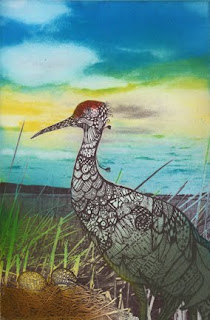 A review of her solo show can be found at the Weekly Alibi newspaper.
Posted by New Grounds Print Workshop at 4:40 PM No comments: 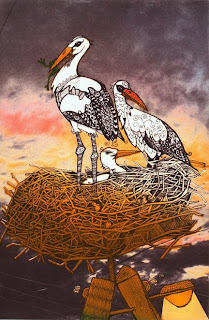 
Her gravure works on display at New Grounds Gallery, Emergence, use the avian subjects as muse and protagonist, and the effect is both sentimental and whimsical—not to mention visually stunning.


A UNM grad in fine arts and printmaking, Allen's process is meticulous and multitiered. She incorporates mediums including ink drawing, photography and poetry into her roughly 7-by-10 inch multi-plate prints, which she issues in series of six or seven. She blends methods of the new and old, using Photoshop to assemble her pieces and create photo positives to transfer onto gravure plates. (She uses nontoxic polymer plates, as opposed to the traditional copper plates first used in the early 19th century.)


The series is aptly titled, as it brings forth the idea of a weighed-down soul taking flight through self-expression, breaking free of an inner darkness. This can be seen in Allen's use of text in her images—poetry which is subtle yet sincere. In a piece titled "Drawn to Nature 2—Balance," she writes, "Keeping balance in this wayward life—as I weave in and out of waterfalls and waves of atmosphere—cresting atop the earth ... landing on each twig to perch—contemplate release and move on." This text hovers above an ornately feathered ink-drawn bird, contrasted against a background of moody deep purple and blue hues. The bird is perched atop a lonely, spiraling limb and seems to be pondering a departure. 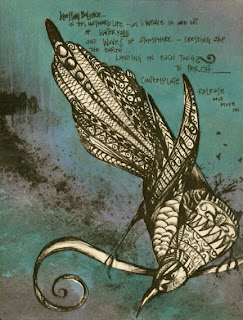 “"Drawn to Nature 2—Balance” Allen's use of intricate inked patterns within the feathers of her subjects has a manic quality that, upon close inspection, can be unnerving. Despite the flawless technique of her printing and her mastery of mixed mediums, these pieces aren't simply pretty bird pictures.


The black and white tones in her characters jump out starkly from the blended, faded pigments of her backgrounds, which look often like fading sunsets or barren, forlorn fields. This is where some of the poignancy in Allen's work is—the contrast between the bold characters and their distanced surroundings. There is a feeling of extra-dimensionality to the pieces, as if the subjects are somewhat divorced from the world around them.


The crafted chaos in Allen's work spreads into the configuration of Emergence, which is divided into four subseries. Each set has a distinct look and feel. One, titled Nesting, appears to be about the ideas of environment and refuge. Another, titled Remembrance, delves into nostalgia and feels like it could be a set of visual eulogies. This series stands out from the others as it is all in monochrome grayscale and sepia tones, and it’s more straight photography than mixed-media. Each piece is a diptych, showing a bird in one image and a nature scene in its counterpart, such as a picture of withered, windblown flowers. They bring to mind century-old stereographs. And you get the feeling that in Allen's world of anthropomorphic metaphors, these birds are loved ones lost to time.


But the bleakness of this series is often offset by wry humor. One of the most stunning pieces is "Nesting—Origins," which depicts three cranes in a nest of haphazard twigs balanced on telephone poles, with wires hanging in the background. The boss crane holds a frog in its mouth. There is something devilish going on here—the coexistence of resplendent nature and industrial gloom; the admission that Allen's magnificent protagonists are not innocents.


Allen's work is frenzied and mysterious, but in a way that seems to perfectly capture and reflect the complex battleground of a poet's mind and heart. Her birds are messengers, flying home stories that are marked too deeply in love and pain to be nakedly exposed. Instead we must contemplate the delivery, and appreciate the beauty and courage that emerges from it.