Archangel Uriel depicted as an elephant carrying eggs and, wait, is that an outhouse??? This quirky, tongue-in-cheek, yet thoughtful imagery simply oozes out the brain of New Grounds’ etcher Ray Maseman and continues to keep us entertained and, at times, scratching our heads. 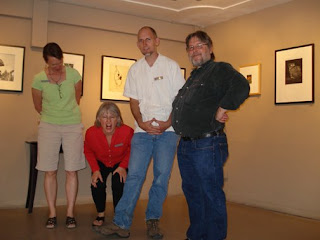 “Stars of the Show” 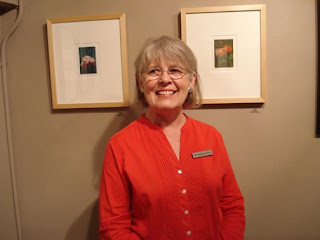 Maseman is one of the several New Grounds artists represented in this show of “Realism in Printmaking” with artists from several continents as well as the different categories of realism from contemporary to magical and surreal. From left to right, New Grounds artists included Jeannette Cook, Carol Walker, Ray, Brian Giza. Joel Nowlin and Pamela DiMauro also have work in this show but could not make it to the reception. 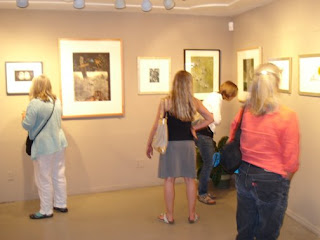 As always, our reception was well attended. Gallery visitors spend a lot of time taking a close look at those highly detailed images, some of created by well known artists from Japan, France, Bulgaria and Mexico. 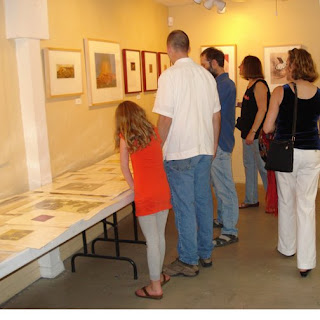 For those wanted to get their hands on the artwork, our “back room” was stuffed to the brim with more work! 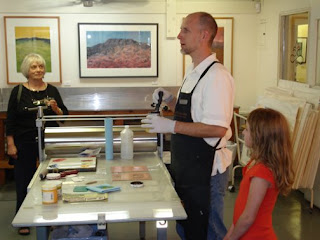 For those of you, who like to find out more about printmaking, check out our demos which are held at 6:30 during First Friday Artscrawl receptions. For this show, Ray Maseman, with the assistance of his daughter Nora, showed us some of his tricks for printing his colorful etchings. The key to his images: 2 plates and several stencils for selected color! 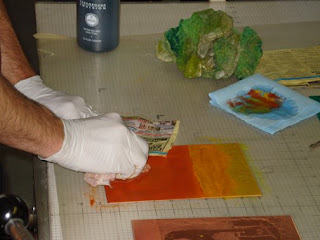 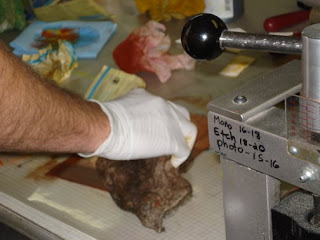 For “St Uriel” Ray created his first plate, or “key” plate out of line etching (see description below) and the application of some aquatints (see description below); it defines the image and also contains most of the shading. This plate is inked up completely in sepia. The second plate was created mainly out of flat aquatints which are used to print the vivid background colors. This plate is inked and printed with several colors, a technique called “selective wiping.” 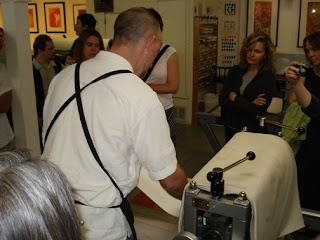 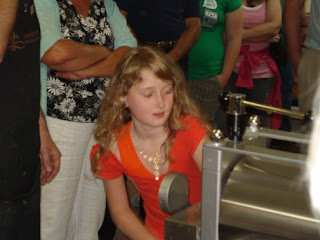 Place Demo 7, 9 and 10 here
Now that both plates are inked, Ray places the color plate on the press bed, printmaking paper is laid over the plate, and his daughter Nora runs the press for him!

Note: for printmaking paper we prefer Hahnemuhle, it is super absorbent and will pick up the slightest details and subtest gray values! 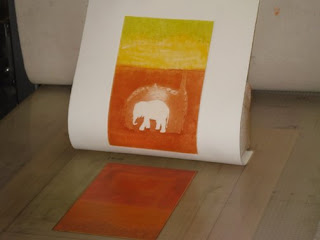 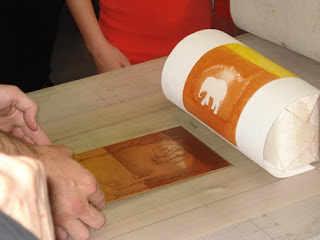 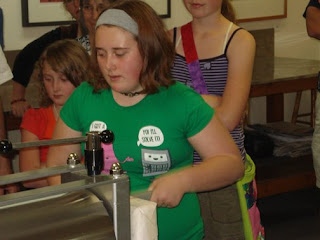 The paper is locked into position with a brick wrapped in newsprint. The paper is gently flipped over the brick, the color plate is exchanged for the key plate, and it is run again trough the press, this time with the assistance of Ray’s older daughter Meghan. Sorry, you have to bring your own kids if you want free help pulling prints at New Grounds….!!!! 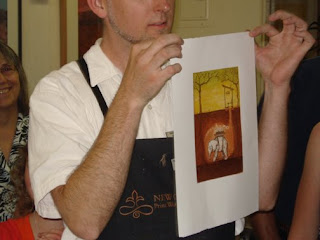 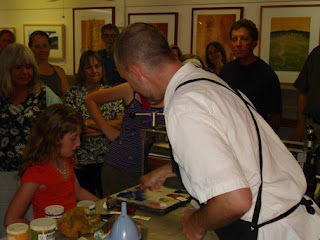 Place Demo 13, 14 and 15 here
But we are not done yet! Two crucial elements, the elephant and the outhouse, are still missing from the picture. For those, Ray cut stencils out of Duralar. This is a plastic material perfect for this process. New Ground is a supplier for this stuff, by the way. It is soft enough that it can be cut easily with a scissors or x-acto knife, but stiff enough so it won’t curl around the brayer when it is inked – something mylar does. It is sturdy enough so it can be used multiple times – the stencil does not have to be re-cut for each impression. Ray inks the stencils with a brayer just as he would roll ink on a monotype plate. 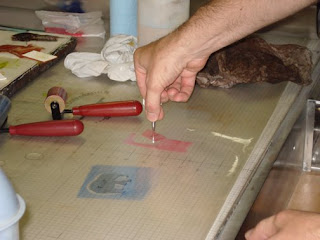 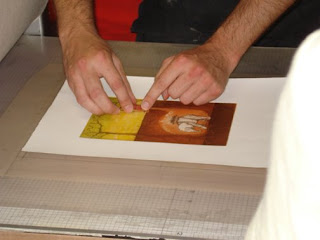 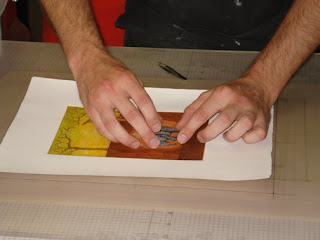 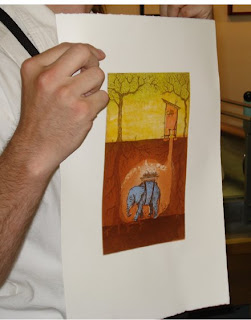 The inked stencils are then picked up with a tweezers and carefully placed ink side down on the previously printed paper. To transfer the ink the paper together with the stencils have to be run through the press one more time (not shown here). Voila - the finished print! Awesome, Ray!!!!! Now, seriously, what IS the meaning of the outhouse? 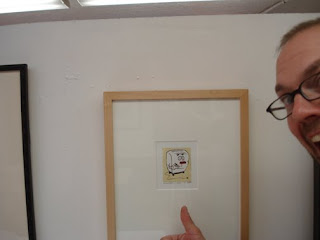 All photos courtesy of Jeff Simpson who was filling in for Bruce Childs. Great job, Jeff!


Aquatint: This effect of this method produces solid areas of tone. The plate has to be covered at one point with very fine particles (traditionally rosin, at New Grounds Z-Acryl hard-ground is air-brushed onto the plate) so that the almost invisible openings between those particles can be etched. To the naked eye those tiny etched dots will appear as a gray tone. Shades of gray are achieved by altering the length of the etch; the longer the etch, the darker the tone will appear.

Line etching: In this technique the plate is covered with an acid resistant ground (at New Grounds we use Z-Acryl hard-ground), then worked with an etching needle to create an image. The thus exposed metal is then "eaten" in an acid bath such as Nitric Acid which today is considered “toxic” or an etchant such as Ferric Chloride which is used at New Grounds because it is “non-toxic”. Etching the drawn lines creates depressed areas that are inked and printed. Etching was developed during the 16th century, and started to replace engraving by the 17th century.
Posted by New Grounds Print Workshop at 11:21 AM No comments: 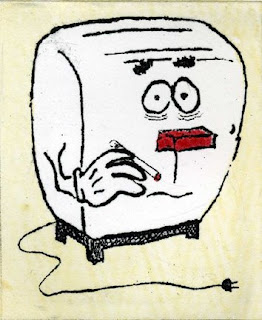 Jeff Simpson
The Spokestoaster is in Rehab
Gravure
3.5 x 3"

This liberating medium combines painting and printmaking techniques. Monotypes are one of the most immediate forms of printmaking. You will be introduced to a variety of techniques from basic to experimental, and work with high-quality water-based Akua-Kolor monotype inks.

New Grounds and Matrix Artists’ swept up a huge amount of purchase awards from the CABQ 1% for the Arts Program.

We want to give a round of applause to the artists’ whose work was chosen by the city. Artists’ represented by Matrix Fine Art include Sally Condon, Harriette Lawler, Katrina Lasko and Iva Morris. Chosen from New Grounds Print Workshop and Gallery were pieces by Diane Alire and Dan Noyes.
The City of Albuquerque's Public Art Program, one of the oldest in the country, began in 1978, with the passage of the Art in Municipal Places Ordinance. This bold initiative set aside 1% of City construction funds derived from the general obligation bond program and certain revenue bonds for the purchase or commission of works of art. (Read more about it at http://www.cabq.gov/publicart/about-1-for-art).
Posted by New Grounds Print Workshop at 12:01 PM No comments: 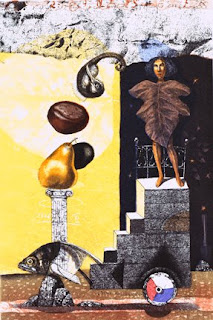 
Although great strides have been made to move printmaking into different directions, it continues to attract those detail-loving, obsessive artists who find great satisfaction spending hundreds of hours on a cross-hatched line etching. This International group show features some outstanding examples of contemporary realism, magic realism and surrealism in printmaking.

Demonstration during the reception: Etching demonstration by Ray Maseman from 6:30- 7:00 PM.
Posted by New Grounds Print Workshop at 10:27 AM No comments: